Today we start a new series that I hope will become a tradition every Friday around here at Mobiusman.com. It’s borrowed from an idea that I saw recently being done quite expertly on a few blogs that I like to follow. I’ve just given this idea a little half-twist (in true Mobius fashion) of my own and called it “Quotivations”.

What is a quotivation? It’s a mash-up of  two words: quotes and  motivational.  Get it? I thought you would you brainy thing you. You knew all along that good quotes, just like all well-assembled word pictures, have the power to motivate and inspire didn’t you?

So here goes our first submission in the “Quotivations Day Series: 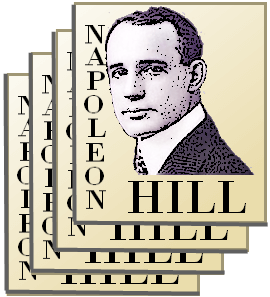 “Failure brings with it the seed of an equivalent success”

I found this quote in an email I got last week. It’s a quote from one of my most favorite authors of the success/failure dynamic – Napoleon Hill. I like him a lot. Not because he wrote one of the best selling motivational self-development books of all time but because he himself – like a ton of modern-day self-helper/coaches after him – failed to deliver the raw goods and instead skillfully side-stepped the most important “how to” information everyone was needing but no one was aware of yet.

Of course that’s one of the reasons he got away with it. The other is the fact that his was still an age of innocence.  He became a masterful user of the language of his time and that was enough to placate his hungry audience. Enough that they bought his stuff in droves.

Unfortunately, Hill was a great salesman so no one ever noticed that he never got around to actually explaining the mechanics of persistence and determination that lay at the root of what he was trying to say in his books.

Is it because the English language had not evolved enough by his time so that he could use it to explain this mystery cogently? That might be part of it. We do have a better understanding of how human immune systems work these days than we had back then. But, of course, he would have had to have realized the esoteric connection as to what role mindset immunity plays in success attainment.

No one that I’ve ever come across has ever done it yet. A quick search in Google for “mindset immunity” just brings up results tied to this blog right here.

So, what exactly is the “seed of an equivalent success”?

I can sum that up in this one little three-word statement of fact: Failure causes immunity.

Do you have a favorite quote you think should be included in this series?  Please, just leave it here together with your comments. I greatly appreciate your help and involvement.

Want to know more about mindset immunity? I’m creating a new DVD called “Immune To Failure  – Essentials” and you can get notified of it’s release here.

“A man should learn to detect and watch for that gleam of light which flashes across his mind from within more than the luster of the firmament of bards and sages.”