For the last half-century or so an odd-ball spoof magazine has graced the news stands: Mad Magazine.

I, like a ton of other young boys, became aware of it when I was still in grade school. On the cover was the magazine’s fictional mascot and iconic symbol: a zany spokes-guy by the name of Alfred E. Newman. Alfred’s favorite catchphrase “What, me worry?” was also featured somewhere on the cover of every issue. 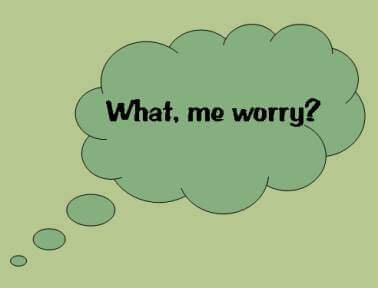 As kids if we couldn’t remember his name it didn’t matter, we just referred to him as the “what-me-worry-guy”; everyone knew who you meant.

But despite all the years of clever satirical humor (often at the expense of those currently in the glow of the news or popular entertainment) the general population today is reportedly more worried now than ever.

In my local paper today is a good example of how the news media is playing us all into the worry hole.

It’s got a short article that has both the ‘f’ and the ‘w’ words in it. The headline screams: “Be afraid, just not about flu”.

The local media, being the media, has apparently upped the ante in the fear department. Now they’re telling us we don’t have to be worried – we have to actually “be afraid”.

The article says we need not just worry about the swine flu. We need to be afraid of all the other horrendous stuff going around in the world as well.

It goes on to list a sampling of some of the worst plagues to torment mankind.

Now I hope you’re not reading this and trying to digest your breakfast (or lunch, or dinner). That might lead to other serious problems to add to this appallingly frightful list.

Problems that might really be closer to home. Problems of the gastrointestinal kind.

Look, I’m not meaning we shouldn’t be aware of what’s happening in our world. I’m not saying we should avoid the news or any other reality by sticking our head in the sand.

Not by a long shot.

The fact that there are lots of things all around us with the capacity to generate considerable genuine worry and fear in people is the reason that I carry on my life’s work.

That work is now morphing into a new social movement that I call “Mobiusmankind”. It will see a growing community of benevolent people who possess mindsets that, while they may not be satisfied, always experience a state of happiness despite difficulties. Those who have a mindset that are more interested in helping others get across the finish line than constantly striving to get over it first themselves.

My role in this new movement is to articulate and promote the use of a simple tool I developed that helps people unlock the phenomenon of a hidden energy that exists within all humanity. This energy is intelligent and is the source of human happiness, adaptability, resilience, and creativity.

An energy that is the source of what I call the “new immunity”. I call it that because it operates on your thinking much like your physical immune system operates in your body. It restores your state of normalcy. It cause your mindset to be so incredibly stable over long periods of time that I can only describe it as being “immune” to even failure itself.

I’m not a therapist. Those people are generally away smarter than I am. They can prove it too. They have embossed credentialed and beautifully framed certificates decorating their office walls. They even have letters after their names for God’s sake.

I don’t have any of that.

The only kind of things I have on my wall is a few of my own hand-drawn cartoons stuck there by a few strips of green painter’s tape.

Because “therapy” is not what I do I can’t recommend the stuff that the highly educated types do in the therapy business. They like to talk about the many different types of mindsets. They have names to describe them – names like “fixed” and “growth”. They seem to like to suggest very complicated sets of instructions that only they (for a hefty fee) can help you understand.

Therapy gems like this:
“…analyze the inner-dialog that your opposing mindset voices in your head are saying, then weigh the one against the other to…”

Voices in your head?

Those of us with immune mindsets don’t have much of that going on anymore. Not during the day and not at night either.

If we did that might really be something to worry about.

Till next time… More power to you.

Are you in? Want find out more about how to make any mindset immune to worry, fear, and even failure itself? Go ahead click here. It’s PHREE.

You’ve got a song you’re singing from your gut, you want that audience to feel it in their gut. And you’ve got to make them think that you’re one of them sitting out there with them too. They’ve got to be able to relate to what you’re doing.