There’s something I know about you that may shock you.

It’s something that is so crazy and off-the-wall strange that you might refuse to believe it.

And I wouldn’t blame you at all.

I hope you’re sitting down because here it is:

You have an extra brain.

Remember, I told you it was crazy? When I first heard of it I thought it was too. Until, that is, I found scientific evidence from a doctor that backed it up. 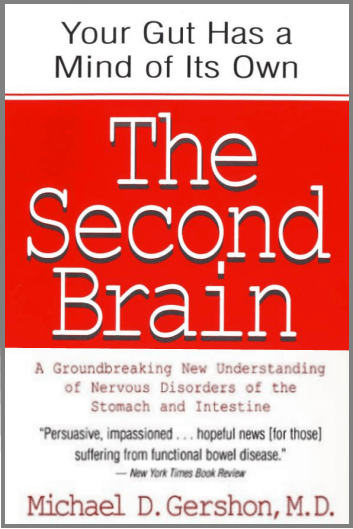 But what on earth has this to do with building my self-confidence?

Let’s start with discussing what exactly we’re talking about when we talk about self-confidence.

According to Wikipedia “Self Confidence” is described as:

Confidence comes from a Latin word ‘fidere’ which means “to trust”; therefore, having self-confidence is having trust in one’s self.

Trust is a huge factor in building self-confidence and I’ll have more to say about it in a minute. But first let’s be clear on what we’re talking about.

In my view there are two kinds of self confidence:

Obviously the first type of confidence, Work Mastery, is the most common so for our purposes here we’ll be referencing the second type, Social Serenity, whenever the word “confidence” is mentioned.

If you go online you’ll find a number of remedies for low self esteem or lack of confidence. You’ll see free tips to get you started on building your self confidence. Almost all of them will tell you that it will take persistence to get the job done. In other words, their message is: It will be a long long road.

So, you might see results after you’ve completed the course, read the books, attended the seminar, and contemplated your existence while sitting quietly in a lotus position on a mat by yourself for twenty minutes a day over six weeks or so.

But here’s the good news: 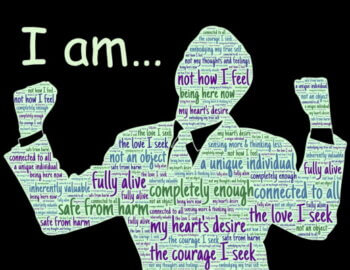 All the above becomes quickly possible, or not, depending on what brain you’re predominately working with.

Remember you have not just one but two very different brains in your body.

As a human being you do two things everyday all day: you think things and you feel things.

And now we know you have a separate brain for each of those two tasks. The one in your head is a thinking brain but it can’t feel anything. There are no pain receptors in the cortex at all.

The other one is in your gut. It’s much smaller but it’s not designed for thinking much. It’s a feeling brain. It feels everything from your greatest joys to your deepest sorrows… and everything in between.

It’s extremely sensitive to pressure. Which is how it does it’s job of managing the complicated work of the digestion process so incredibly well. Of course, that’s not all it does.

If you want to speed up the process to building self-trust and be blessed with an immutable confidence on an ongoing basis your second brain (AKA: your gut brain) is the place to go.

Now, in case your wondering, we’re not going to abandon the head brain. Certainly not. We need both brains working in concert to be able to think and feel at the same time. That way we can experience the good vibes of the gut brain and use that to suppress the noise that the head brain is in the habit of creating. That way we can check the decisions we’re thinking about while, at the same time, see how we feel about them before we put them into action. I call this… 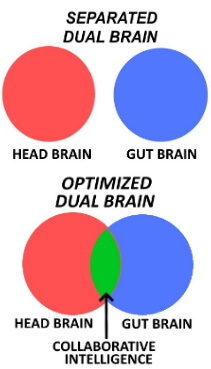 But why do we need this?

One big reason is to distance yourself from all the negative self talk that’s holding you back. Remember, it’s critical that you need to see that you can trust yourself. That you’re worthy of success. To arrive there means that you must first build a rock-solid self belief. If you can do this your self confidence will soar.

The big question, of course, is how?

The key is to know the truth. The truth that you have been successful your entire life. That kind of truth is powerful stuff. But it’s only found by examining the one thing that backed your success in any achievement you’ve ever had. It’s called your GRIT (better known as the gut drive of persistence).

I have two acronyms that I want you to remember from now on.

Why are these important? Because of a critical finding made by researchers over forty years ago and reported in a book which sold over three million copies back in 1978. It was titled “In Search of Excellence”.  It appears that the old adage ‘Nothing succeeds like success’ turns out to have a sound scientific base…

Researchers studying motivation find that the prime factor is simply the self perception among motivated subjects that they are in fact doing well.

…mere association with past personal success apparently leads to more persistence, higher motivation, or something that makes us do better.

Ya, “something that makes us do better”. I love that. They didn’t have a clue as to what that “something” was but today, after all this time, the answer to that question is coming into focus. And you my friend are going to reap the greatest rewards because of it. That is because you now know about that extra brain in your gut. Knowing this can make a big difference in how you can develop a self confidence that never leaves you.

PS: Want to know more about how you can use your dual-brain system to acquire a through-the-roof confidence and a rock solid self-belief that never leaves you?

Then go here and learn more about the HERO Tour now.

I’m old school. I’ve never had a tattoo before. Never wanted for one either. In fact, I always thought they were only for sailors, wrestlers, or bikers.

But I got one anyway even though I wasn’t in either of those groups. Not because I wanted it but because I didn’t want cancer either. Imagine, a tattoo that helps prevent cancer. But more on that in a minute.

Today it’s quite different. Lot’s of people are getting their skins inkulated in multiple colours. In the US it’s reported that over forty million individuals are feeling proud to wear their skin customized by a tattoo artist.

It’s not just burly men either but ladies too are getting it done in all manner of unimaginable places. They are part of the growing number of people that have them and who are crazy for more.

He was an incredible artist who lived in Saskatoon Alberta. He ran a small business there. A tattoo studio to be precise. His artistry was devoted to designing and then permanently embedding those creative images with ink into a client’s skin. He not only did to them he did it, or had it done, to himself.

Obviously, he loved the medium of ink on skin — or ‘skin-art’ as it’s called in the industry. But Chris had a hunch he wouldn’t be around for very long. Before he passed away in his sleep on October 31st the 41-year-old had asked his wife and business partner to consider his post-death request. He wanted his tattoos to be preserved in a frame behind glass as his memorial.

Apparently, Chris had earlier reached out to a company based in Cleveland, Ohio called Save My Ink Forever.

He had made arrangements so that, when the time came, they would perform the necessary procedure. It can be complicated. It involves the skin to be surgically excised, preserved and then professionally conserved behind glass. The process takes about three months and, in his case, costs about $80,000. His wife had agreed. But to get it done wasn’t so easy.

Five funeral homes in Saskatoon refused to allow it in their establishments. Finally, a sixth one, Mourning Glory Funeral Services gave it the go-ahead. It will be the largest skin-art preservation of its kind in North America to date. But nothing like that will ever be done to mine. Not even if I paid eighty large ones for it.

That’s because my tattoo is not just on me. It’s in me.

See, I didn’t want a tattoo. I didn’t even ask for or pay for this one either. In fact, it wasn’t even done by a recognized tattoo artist. But it certainly was done by a real live professional. Although he wasn’t wearing jeans and a sleeveless t-shirt and a bandanna on his head. No. My guy is more a plain-Jane-white-coat type.

He had removed a small polyp on the inside wall of my colon a few months earlier. This year it had grown back. He showed me a snap of it on his computer screen in his office. Apparently, it was a cinch to quickly find the exact area because the doc had skillfully, and strategically, placed a little purple dot of tattoo ink on the colon wall near the spot where he had previously pulled off the offending wart.

So, he got it again and this time he carefully cauterized the area before he left. Not much chance of that thing making another appearance.

I was to go back in for another procedure sometime early in 2020. When I did it was clear that there was no further occurrence of that ugly growth. It was completely gone.

My doc said I should come back for one last time in about five years. That’ll be just before my seventy-fifth birthday when I age-out of the system for this kind of procedure.

Some advice: If you’re getting long in the tooth like I am I suggest that you have yourself screened for colon abnormalities. If polyps are allowed to grow for too long they can become malignant. If they work their way through the colon wall then the chances of your system becoming exposed to cancerous cells goes way way up.

Then you could be in real trouble. So, don’t delay.

Colon cancer can be prevented. My tattoo tells the story of how.

PS: There is a lot of magic happening in your gut. Ever had a gut twinge telling you what direction you should take and it turned out to be right? That’s your second brain at work.  It’s important to know that you can optimize both brains together to make sure that you not only have good information coming to you but that you have better information coming through you. To get the lowdown on how this works to set your mindset up for greater resilience jump on this link and join me each Saturday for a quick live video. See you there.