A Mobius Strip and a Mystery. 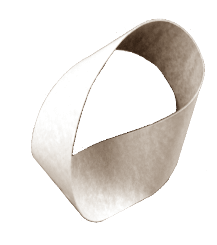 I’m willing to bet that the day he dreamed it up 150 years ago he never thought it would come to mean so much as it does today.

He was lucky though. It was a super- elegant design but was so simple that anyone could have thought of it but… no one did. I’m sure he would be pleased to see that so much is being made of his ” little parlor trick”.

That’s what they said about Ferdinand August Mobius’ little invention back in 1858. After all it was just a flat strip of paper with a half-twist in it and joined end to end. No big deal except it had some very cool and unusual properties. Only one surface and one edge!

d objects in particular. By the time he discovered the strip that would bear his name he was becoming a recognized pioneer in the branch field of mathematics known as topology : the study of the properties of objects. He described his creation in typical scientific terms: a “linear fractional transformation” he called it.

I didn’t care about all that stuff though.

When I first laid eyes on the famous strip I was just twelve years old after all. I had received a subscription that past Christmas to one of those wonderfully produced book series by Time/Life. You know the ones. They had big easy-to-read pages with hard covers. They we’re loaded with lavish diagrams, illustrations, and photographs in full color. This particular one was on Mathematics and, while math was never my long suit, to me that book made a dry subject look absolutely fascinating. I immediately knew that the mobius was something special and unforgettable. When I actually constructed one myself I was hooked.

Years later I would recall that moment. There I’d be sitting in my bedroom looking at that page featuring the Mobius strip. To this day, now 57 years later, I still have one sitting on my desk. As it turned out it truly was unforgettable.

So impressive I even named my company after it: Mobius Transformations. For me it would come to be the perfect metaphor for the phenomenon I had discovered: the effect of two different things becoming one.

The mobius strip would be a perfect symbol of the transformation that takes place when the two most powerful motivational forces that operate all of humanity blend into one homogeneous system. It would demonstrate so elegantly how this phenomenon operates to naturally buffer the negative effects of the stresses of life as they occur in real time. I call it the “Mobius Effect”.

For me, and a few others who experience it, that effect was absolutely profound and life- changing. I’ve since come to understand that it’s what it does for the strength of one’s mindset and how it does it that is the really big story.

I’ll be telling you a lot more about it in upcoming posts in this series so be sure to get back here often.

Part 2 will appear here in a couple of days.

I hope you don’t mind waiting.