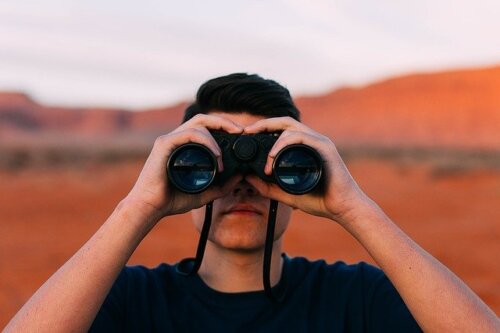 The interesting thing about what I do in my work is often the disparate connections I find with the physical and the ethereal. This time it’s something in ophthalmology known as stereopsis.

This term describes the advantage of having two separate eyes that see an object from different perspectives but are able to blend it so that an accurate image is created in the visual field of the brain.

Of course I had to put my spin on this. This is the interesting part.

As I have stated on this blog many times I see the nature of humans as being a dual setup. That is, two distinct realities in one.  One physical and one ethereal.

In the construction of the human body, weather you are aware of it or not, is found two different sets of brains. One in the head and a lesser known one in the gut.  The top brain can think but not feel and the gut brain can feel but is not a ‘thinking’ brain.  This duality can be existing in a particular person since birth but yet operate separately without much perceptual benefit of one to the other because of a serious disconnect.

The whole point of having two eyes is to bring into focus the reality of depth perception. This, on a very basic level, is what stereopsis is all about. The problem is that, while this blended vision happens quite nicely with image data from the two eyes, it fails miserably in perceptual reality with the two brains. If it didn’t we would all be experiencing a viable level of active mindset immunity 24/7/365.

If we can get both sets of brains working together in a manner th   at would fit the needs of  stereopsis then what they will be able to present to the intellect is a perceptual picture of the non-physical active gut-based agent that has all along backed yet another phenomenon existent in each and every human: the drive of persistence and determination.

The overall effect of this special type of steropsis is proof that the individual is indeed way more than he or she might see themselves as being previously.  This is the takeaway that a solid belief in oneself based on hard evidence can provide. Call it self-esteem, super self-confidence, whatever you want. It’s not just a learned attribute it’s really more like a new capability.

Mindset immunity (the theory that you have a parallel immune system for the thinking mind as you would have for the body)  appears almost completely non-existent in most all people because it is indeed so slow acting. It’s job is to do a similar job that the body’s immune system does: getting things back to normal. In this case the gyrations both up and down of rogue thinking.

For example, I’ve recently become aware of a guy, I’ll call him Bobby, who has just this week broken up with his girlfriend. The relationship is a fairly new one. It actually started only about two months ago. I won’t get into the details except to say that she is getting back together with her husband who is the father of her three young kids. I suppose you can say that she dumped Bobby in favor of her ex-husband.

This is seen by Bobby as a direct rejection of himself as a person and he is having a real problem coming to grips with it. Last year, he once told me,  he spent over one thousand dollars attending some sort of three-day self-help seminar that made  him feel better about himself. Despite the glowing way he spoke about this particular seminar his current knockdown has him back on the anti-depression meds that he used to take every day before the costly seminar.

As I see it, and I’m not a therapist of any sort, it’s simply a matter of lack of a type of stereopsis. The immune system for the thinking is seriously hobbled in our man Bobby because the top brain and the intellect cannot apprehend what the gut brain can access.

Head-based motivations come from thoughts generated from a host of external sources and, like a virus in the physical body, they must be controlled or they can quickly multiply causing overriding motivations in the host that are not always very positive.

So… what do you see?

Go with your gut. It will save tons of time.