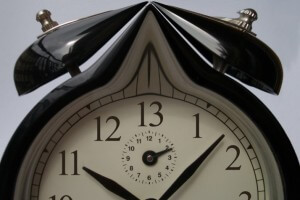 There’s a report in the New York Times about Teatro Flaiano. It’s an opera house situated in Rome’s historic center that for several months now has been home to a new theatre company that calls itself “Piccola Lirica” which translated means “shortened opera”.

100 years ago entire towns came to the opera and spent the whole day there. But now it appears that in the land of Verdi and Puccini you can take in an abbreviated rendition of Tosca and be back out in the streets in time to grab a full course linguine dinner.

Pocket-sized opera is just one more way we can rush through existence and feed our craving for ever- quicker stuff.

It’s a disease known as the time flu and it’s everywhere.

Here in North America, the land that invented accelerated living, if you didn’t have it before you’ve got it now, the iPhone, fast food, and the Internet have seen to that.

It’s a malaise that commonly presents itself as a lifestyle that demands you don’t slow down until you’ve multi-tasked your very life away. There’s little relief anywhere.

If you drive a car and you’re prone to have a heavier foot than allowable by law then it can be very costly indeed. Especially when you add in distractions like cell phones and I-pods.

Where I live here in BC there will soon be a law that prohibits the use of such devices while operating a motor vehicle. That’s not new of course other provinces have had that for a while now. Governments everywhere it seems are in combat mode against time flu and technological newbies are in their sights.

Unfortunately I don’t think we can legislate away something like an infirmity of this magnitude.  It’s too late. It’s metastasized itself into our culture and now everyone’s in a mad rush.

That motif  I thought was nicely summed up in the catchy bumper sticker I saw the other day that warned: Don’t drive faster than your angel can fly.

I wonder if that’s kind of thing the actor in the condensed Tosca was thinking just before she had to fling herself off the parapet in Act Three only a mere 90 minutes after the opening curtain.

More power to you all.

For those of you who have read my posts you probably know that I’m all about expanding the awareness of something I call “mindset immunity”. It may sound like a radical idea. Too strange even. Like the words don’t belong together. For me though, the term describes an essential process that explains a lot of things about what happens when humans create and use thoughts and that’s why I invented it.