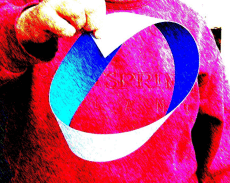 Although I usually write quite a bit about “mindset immunity”  a while back someone asked me about my “Mobiusman” handle. This post is in response to that. It‘s also an add-on to a series of posts I had previously published beginning here.

Most people will not know what a mobius is although they might recognize it if they saw it. I have explained it in previous posts but here’s a quick refresher.

It’s an invention that, about 150 years ago, was credited to August Ferdinand Mobius.  He was a professor of advanced mathematics at the University Of Lipzig where he contributed to the advancement of a very esoteric sub-field of geometry known as “topology”. When he created the first mobius strip his interest was the examination of two-dimensional forms in three dimensional space. Originally he took a strip of paper and, before joining the ends to each other, gave one end a half-twist.

When I first saw it I was a young boy of ten or eleven years old. It was in an illustrated book on mathematics and I was immediately intrigued with it.

Many years later, when I developed the H.E.R.O. eMachine together with the theory of mindset immunity, I immediately employed the mobius strip as the perfect metaphor that symbolized the key points I was attempting to communicate to the rest of the world.

What better image then a simple construct like the mobius. In an amazingly elegant way it suggests a continuous stable loop of motivation as well as infinite possibilities. For myself and for others it has become an appropriate symbol of personal transformation caused by using the H.E.R.O. eMachine format just once.

There are a few key points that I like to use the mobius strip to help me illustrate.

I was continually invoking the idea of the double nature of humanity in my work. I’m a visual guy so I needed a physical structure with which to model the story of how the integration of both mindset and physical immunity work to improve the efficiency of the entire system.

In fact the mobius was so good at illustrating the phenomenon of transformation it was chosen by Gary Anderson in 1970 as a base for his design for the symbol for recycling. It’s still in use today.

Industry leaders, entrepreneurs, educators, and average families today need to get more out of existing resources because it’s more efficient to do so. This applies to physical as well as creative or intuitive resources as these produce results quicker and time – as they say – is money.

The idea of duality is deeply involved in what it means to be human. The idea of the two human natures, the physical and the ethereal, go back a long long time.  Discussions about these elements can be traced back to the times of the great philosophers such as Aristotle and Plato.

I really like the idea of infinity as it relates to how endlessly dual immunity can work to support each of its two parts. The symbol for infinity in mathematics is called the “lemniscate”. It basically looks like a figure eight lying down on its side. Lemniscates, if drawn in three dimensions and then rendered in the third dimension as a flat band, becomes a mobius strip.

It is clear to all of us that negative thinking makes us “stuck” and unable to move forward as we should. In a story, the first ever published on the surface of a mobius strip, I told of the opportunity for freedom of mindset that transformation brings.

I like to think that the mobius is a story about potential. I tell this story often with special emphasis on the two directions that information can travel. It can go to you or it can come through you. The latter being more easily comprehended at a gut level.

So, what’s your handle?  Do you have one? If so tell me about it and if it’s visual send me a picture of it. I’d love to hear from you.