It’s worth over seven billion dollars a year. Millions of us engage in its use every day.

But, for many of us it’s an unrealized waste of time.

I’m talking about the burgeoning self-help or self-development, or self-improvement industry. Whatever you call it that’s the one that’s got some of the biggest most recognizable names making huge profits from it.

But there’s a serious flaw here and it boils down to simple physics: heat rises.

What’s that got to do with your practice of self-development techniques?

Most of us have tried this in the past, but if you haven’t be a good sport and play along.

Take a positive statement such as “Today is going to be the best day of my life!” Say it out loud while you stand in front of your bathroom mirror or when you’re alone in your car driving down the freeway on your way to work.

Say it repeatedly for a couple of minutes or so.

Notice how you feel. A little more perked-up maybe? No different at all?

Either way it’s a problem. If you had paid someone like Brian Tracy to instruct you to do this and nothing happened you’d be out your money. On the other hand if something did happen and you felt better you’d still lose.

Thoughts, even good ones,  originate in your head. Many thoughts added together, even if they’re repeated, form a pattern. That pattern throws off an invisible “heat,” called an attitude,that becomes a motivating force within you. The longer the thought pattern the greater the heat or attitude and the resulting strength the motivating force has.

Now stay with me here this is where it gets interesting.

This motivating force will cause you to move. It might be just a simple smile that you put on when meeting someone such as a client or your girlfriend’s father. Or it might be to boldly burst into your boss’s office to say you’re quitting because you’ve decided that life’s too short to waste your time working for him.

The motivational heat from thoughts in your head have gone downward into your body and made you act. But its effectiveness is short lived because of the physics of it. 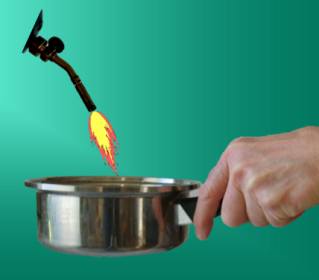 It’s like trying to heat water by directing the flame from the top. You get poor efficiency and you use too much fuel.

You live in a world that is full of other sources of stimulation that also create attitude [heat]-producing thought patterns within you. They can conflict with existing thought patterns and often act to cancel each other out causing confusion as to which direction to take. This makes decision making more exhausting as well as time-consuming.

So you find yourself the next day back in front of your bathroom mirror with your positive affirmations again.

On and on it goes until you eventually burn out.

Doing things this way will make you one of the 95% of people who never succeed to the degree they’d like to. It’s just too much work.

The solution to all of this is to do what you do when you want to cook something in a pot. You heat it from below. 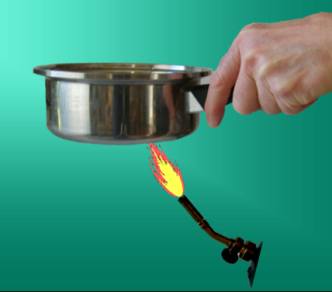 Don’t use your thoughts to create motivation instead go with your gut. Motivation from your gut (gut brain) is far more authentic. After all isn’t love based in the heart area?

Dynamic business leaders and decision makers don’t like fluff.  They very often will say that their best decisions are based on perceptions that come from how a thing feels.

Try it. It’s quicker and you’ll be happier for a lot longer with less stress.

More power to you all