I recently got an e-mail from a good friend of mine copywriter extraordinaire Donnie Bryant.

Donnie knows a thing or two about my theory of mindset immunity and how I’m always interested in what’ s happening in the field of human behavior.

When I first went to the link that he so kindly provided it was a bit of a shock at first. Had some Harvard psychologists usurped my discovery and are now basking in the all the glory of a major breakthrough in human behavior? Had I been totally scooped? Are they now about to crash through my front door any day with the muscle of the Thought Police to seize all my related documents?

False Alarm. I overestimated the size of what looked like a disastrous event. Seems I wasn’t alone either. In fact over-estimating the negative effects of the punch-ups that existence often throws at us was the main focus of the study that was being reported on.

The article entitled: “The Psychological Immune System” seemed to hit close to home for sure but as I read it I could see that their submarine dive into the ocean that is the human mind was on a fairly shallow curve.

The psych study, published almost twelve years ago in 1998, was comprised of a few Ivy League researchers from Harvard University. I won’t go into a lot of detail, you can read all about it here, but what I get from this article is that all they’ve done is merely observed that the phenomenon of an immune system for the mind seems to exist to ameliorate negative emotional effects coming off of negative happenings.

Maybe it was the just the reported focus of the study, I don’t know, but it seems to me that they could have made more of it than they did. After all, I’m only a graduate of a small art and design college, but when I realized that there had to be an immune system at work for the thinking I almost went through the roof with excitement.

This sounds like a good study make no mistake, but if there is indeed an immune system working to pull our thinking back to normal then it deserves more than a small study wouldn’t you say?

After all we have a boatload of people walking around with some severe mental problems. In the US alone there are the many millions who are caught up in the tsunami of clinical, bi-polar, and manic depression that is sweeping into our communities with more man-eating force every year. Predictions (made by other psychologists no doubt) are stating that by 2020 depression would become the 2nd most common health problem throughout the world.

If we have found a type of an immune system that can look after some of that I think we need to take a closer look at it righty away.

I didn’t go to Harvard. Nor did I attend any hall of higher learning at all save for that art school (does that even count?). But I think that the reason they stopped where they did in their investigation on the psychological immune system, as they call it, is the cold hard fact that it operates in the domain outside of our own reality.

It’s invisible. You can’t see it. Apparently that sets up a challenge that even researchers who study the invisible mind have a issue with. I guess some phenomenon’s are like that.

As I say I’m not a doctor. I was trained as a visual artist not a scientist. But like them I too have quite an intense interest in human behavior and I too have for years suspected that “mindset immunity” had to exist in some kind of organized way. But I wasn’t constrained by their meticulous scientific methods, nor did I have the need to fund expensive studies to come to the same conclusions. I just worked with people one at a time and observed what happened as they used my invention to link their head brain intellect to their gut brain energy.

What came out was a quick and easy immune response that left them almost breathless with wonder at what they could become. It’s hardly heavy therapy. I call it the H.E.R.O. eMachine. It only takes one day to complete.

Being a visual kind of guy has allowed me to create pictorial representations of the mechanisms for how something like this strange immunity might work. Or sometimes doesn’t work. It may not be hard science but there’s a few things that I include in my free live “Mindset Immunity Explained” webinars that I think even those Harvard types might find quite interesting.

Their study found that we humans have a serious bias for over-estimating the level with which we react to all the bad stuff that might happen to us. Is that such a revelation? When we were just kids didn’t each of our parents point that out when they warned us: Don’t make a mountain out of a mole hill?

I really love the guys and gals in the white coats. Don’t get me wrong. They always spend tons of time and money digging up cool findings that I can weave into interesting and fun blog posts.

PS: I could use more sharp eyes like Donnie’s. If you see something interesting on the web that’s relevant to human behavior or self-help please let me know about it either here in the comments section, in FaceBook, or on Twitter.  Of course, I’ll give you a big shout-out for your help. Thanks in advance. 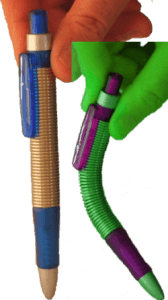