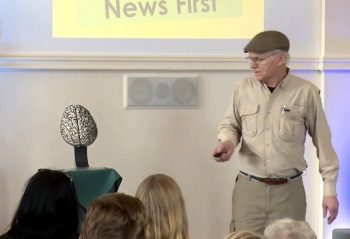 This just fell into my lap.

I had never anticipated that I’d ever do a TED talk about the gut brain. Now, don’t get me wrong, I not saying that I never wanted to – that would not be true.

I’ve been watching TED talks for years now and, admittedly, I have thought about how cool it would be to tell my story on a TEDx stage.

Then, through another volunteer organization that my wife Lorna and I are members of, we came to meet Rachel.

Turns out she and her partner Mike are two of the organizers for TEDx Chilliwack 2016. I was shocked to learn that a TEDx event was being planned for our little city.

It wasn’t long before I jumped at the chance they gave me. I learned that I was accepted sometime in November 2015. A red-letter day in my calendar.

It was a lot of work writing and editing and, since I’m a graphics guy who loves visuals I had to have a slide deck to go along with what I’m talking about.

So, now I have it all done. I’ve sent in my slides this morning. There’s no turning back now. No time for revisions. Hardly any time for committing to my foggy old memory what the heck I’m supposed to be saying.

It that’s not enough the whole thing will be livecast on the net and video recorded as well.

But enough is enough. With just four days left I’d better get to it.

It’s only going to be one of the most important days of my life, but… no pressure.

More power to me.