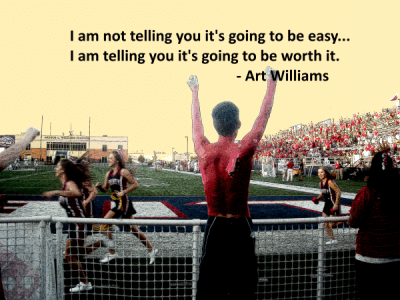 Each week I intend to dispatch my pent-up creativity by creating a new version of something I call a “quotius”. (Learn about the genesis of it here.)

I’ve been around long to enough to have learned that life is all about living with the outcomes of our earlier decisions. We become one of two people:
• Someone who has true satisfaction in their accomplishment
• Someone who has regret for things they could have done but never did

For example, once I started down this road of research and discovery concerning human self-belief, I got to a point where there was no turning back. Didn’t matter how hard or difficult it got I kept working at it.

My siblings thought I was crazy. I wasn’t making much money so they looked justified in their assessment whereas I didn’t.

This went on for decades but I couldn’t shake the truth of the clear vision I had before me. Now every time I work with someone who’s doing H.E.R.O. and they begin to realize that same truth in themselves that’s when I feel validated for taking the path that I did.

If I have any regrets at all it’s that I didn’t start sooner. This is no truer than in my attempt at becoming a masterful writer. I always thought it would be too much work and, since I’m a bit lazy and get distracted easily, the river of time continued to flow by and now at age sixty two I really need to just get on with it.

Although to this day I have not yet produced an actual book at least I do have one in the works now (and, yes, it is as tough as I thought when you first start doing it).

Years ago I was of the mind that believed that there was a lot of things I couldn’t do. That there are things that just can’t be done (at least by me).

I’ve managed to perish most of those old ideas. They really aren’t that useful.

So now, as I start to see things beginning to move forward in my chosen business, I remain more convinced than ever that a deep self-belief powers good decisions.

And I have to say with the utmost certainty of a person who now feels more like a winner every day: “I’m glad I did.”

PS: Have you noticed that a lot of personal development methods no longer pack the punch they once did? Could be the times. I went ahead and invented this simple little brain tweak that makes a huge difference in leveraging your efforts for creating a better version of yourself. Want more? Attend my FREE webinar here.