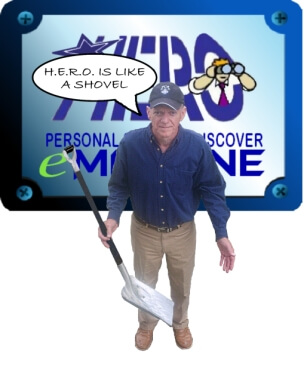 See, I’m guilty because I made the H.E.R.O. eMachine years ago and so far I have not yet launched it in any major market. Pitiful isn’t it?  I just tested it a bit here and there and even had some pretty good results too.

So why am I so slow to get it going? (Hold it. That’s what my wife would ask. You haven’t been talking to her have you?)

Let me start by telling you what H.E.R.O. actually is and then we can get on with my guilty plea.

H.E.R.O. is an acronym (hope you don’t mind acronyms I use them a lot so I’m guilty there too) for:

Don’t worry if this doesn’t make sense just yet, it will soon.

H.E.R.O. is a little… “unusual” I guess you could say. See it’s not at all like any other thing you may have seen in personal development. It’s not a bunch of information that you must read and study over and over again.  It’s not like meditation or yoga either.

In fact H.E.R.O. is downright weird actually. It’s more like a tool or even an appliance like a toaster than a personal development program.

I think I probably describe it best by comparing it to Google… but in reverse. With Google you put in a search term in and it spits out a result. With H.E.R.O. it gives you the proper search phrase, called a key, then you have to look at a past activity that relates to the key. This must be one of those times when you overcame an obstacle where your persistence or determination got a real workout.

Then you’ve got to type that result in and hit “enter”. Then keep doing more just like that with every key phrase it gives you.

It takes a while but by the end of it something incredible happens. You start feeling really really good about yourself but… for no apparent reason.

But we’re not done yet.

Next you’re asked to perform a kind of viewing exercise from inside of your own nervous system. (See, told you it was weird.)

It’s called the “fovea exercise”. If you’ve done it right so far you should be feeling something buzzing around in your gut area just below your rib cage. Now look at that area, known widely as the solar plexus, and type in your “impression” of what you are perceiving as being active there at that location.

Good. Now you’re just about done. Next you have to describe it an at least three of five categories.

What you have seen inside of you is the strangest (yet the most natural) thing you will ever experience. What you are “seeing” is the root core energy drive behind every act of persistence and determination you have ever performed. Or ever will perform in the future for that matter. (I describe it as an immune system for the mindset. In fact I write about mindset immunity a lot. It’s the only theory that makes sense. We have one for the body. why not one for the thinking?)

From then on you will forever be able to look and see that core energy whenever you want or need to. You never need to do H.E.R.O. over again ever. In fact you can’t.  You will be flagged if you try because we never allow repeat attempts once there has been a break longer than fifteen minutes during the process. It doesn’t seem to work as well and just wastes everyone’s time.

If you had a tool like this how would you introduce it to the world? Especially a world that for almost 100 years has gotten used to personal development programs that are based on someone else’s story instead of your own?

Oooh!  Guilt feels so much better when it’s spread around.

PS: Want to join us as we move to change the whole industry of personal development as we know it? Then leave me a comment below telling me how you would get this out to the world and I’ll arrange to give you an almost free H.E.R.O. test drive so you can see for yourself how H.E.R.O. works.